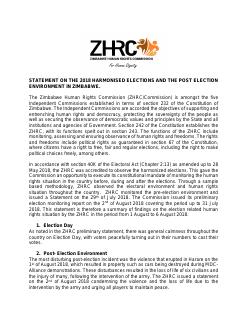 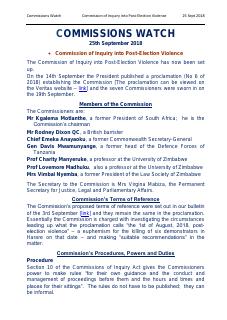 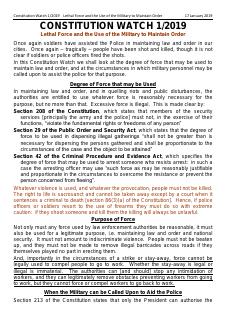 In this Constitution Watch we shall look at the degree of force that may be used to maintain law and order, and at the circumstances in which military personnel may be called upon to assist the police for that purpose. 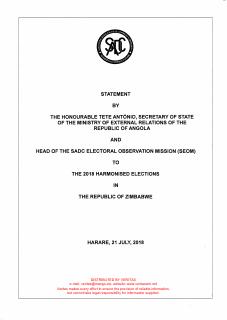 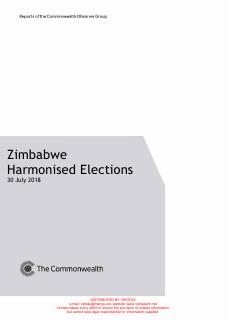 Zimbabwe’s 2018 elections were the first to be observed by the Commonwealth in 16 years. The Commonwealth last observed Zimbabwe’s 2002 Presidential Election. As such, this observation mission provided a unique opportunity to accompany Zimbabwe on a critical leg of its democratic journey. 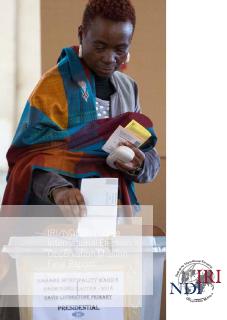 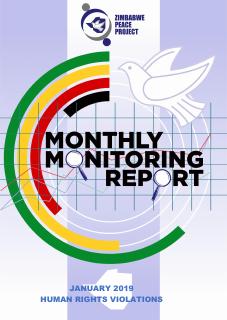 The data collected reported six hundred and eighty eight human rights violations, which have been incorporated into the Shutdown Atrocities Report of the Zimbabwe Human Rights NGO Forum (of which ZPP is member).

Who will guide the guides 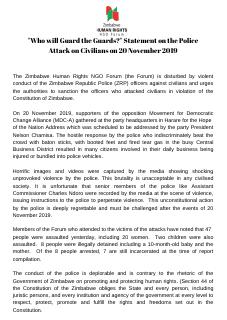 On 20 November 2019, supporters of the opposition Movement for Democratic Change Alliance (MDC-A) gathered at the party headquarters in Harare for the Hope of the Nation Address which was scheduled to be addressed by the party President Nelson Chamisa. The hostile response by the police who indiscriminately beat the crowd with baton sticks, with booted feet and fired tear gas in the busy Central Business District resulted in many citizens involved in their daily business being injured or bundled into police vehicles. 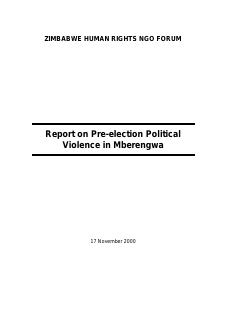 In the period leading up to elections violence, threats and intimidation were used extensively to coerce voters. Politicians of the ruling party and their supporters made statements indicating that the ballot would not be secret and that reprisals would be taken if people voted in certain ways. This report considers the actual period of voting and the first one hundred days thereafter.

The Unleashing of Violence: A report on violence against peaceful protesters in Harare 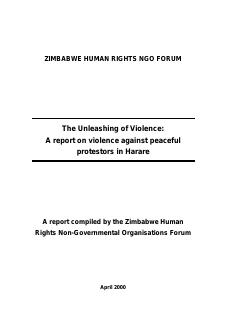 As Zimbabwe moves towards the holding of a general election, which, according to President Mugabe, will be held in May 2000, the political situation has become increasingly troubled and violent. There have been violent clashes between supporters of the ruling party, ZANU (PF) and the main political opposition party, the Movement for Democratic Change (MDC).

Who was responsible? Alleged perpetrators and their crimes during the 2000 Parliamentary Election period 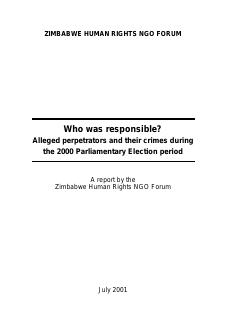 This report is a follow-up to “Who is Responsible?: A preliminary analysis of pre-election violence in Zimbabwe”, which was released in June 2000 by the Zimbabwe Human Rights NGO Forum. It sought to catalog emerging allegations of gross human rights violations committed during the run-up period to the June 2000 Parliamentary Elections and aimed to establish certain facts about the nature of political violence during that time.

If you cant join them, beat them:Post election violence Zimbabwe 2008 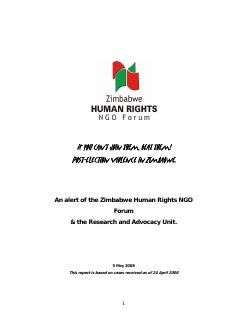 This document, and the factual assertions herein, is based on reports of the ensuing violence received from civic organisations and those published in the press.

The End of A Road: The 2013 Elections in Zimbabwe 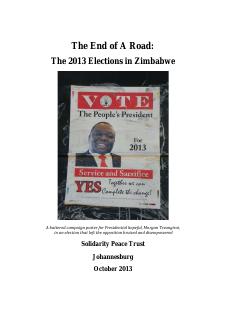 The aim of this report is to provide succinct coverage of the election that brought the GPA to a close and also provide some pointers to the future of Zimbabwean politics.

TORTUOUS PATTERNS DESTINED TO REPEAT THEMSELVES IN UPCOMING ELECTION CAMPAIGN 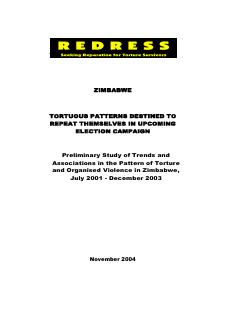 The analysis in this Report is based on the data contained in the Monthly Violence Reports of the Zimbabwe Human Rights NGO Forum. Since July 2001, the Forum has been reporting monthly totals of cases of organised violence and torture. 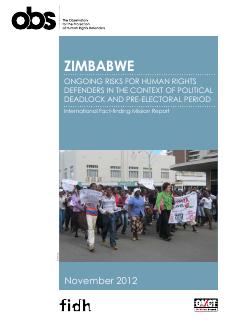 The mission observed that the degree of human rights violations in the country follows a recurring pattern that usually culminates during electoral periods. The country was facing a political deadlock where the leading parties, especially ZANU-PF, were unlikely to reach any agreement likely to improve the political environment, since the MDC considered the implementation of the reforms foreseen by the GPA as a pre-condition for the organisation of elections, while ZANU-PF called for elections as a means to put an end to the prevailing deadlock. 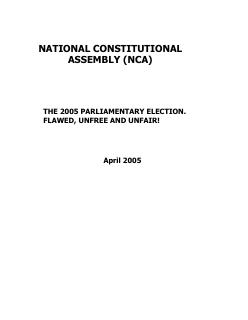 THIS REPORT COVERS ALL THE REPORTS RECEIVED BY THE NCA DURING THE PRE ELECTION PERIOD (FEBRUARY AND MARCH 2005), THESE BEING FROM ALL PROVINCES EXCEPT MANICALAND COVERING 105 CONSTITUENCIES. A TOTAL OF 383 REPORTS WERE SUBMITTED, WITH AN AVERAGE OF 3 REPORTS PER CONSTITUENCY. 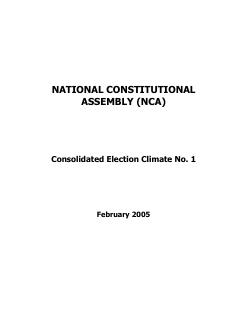 This report covers all the reports received by the NCA for February 2005, coming from 8 Provinces, and 56 Constituencies. It summarises the position that pertained during the last 2 weeks of February. Unfortunately, no data had been submitted from either Manicaland or Mashonaland West by the time of writing, but it is submitted that the data nonetheless do give a good overview of the national picture in February 2005.

TRICK OR TREAT? THE EFFECTS OF THE PRE-ELECTION CLIMATE ON THE POLL IN THE 2005 ZIMBABWE PARLIAMENTARY ELECTIONS 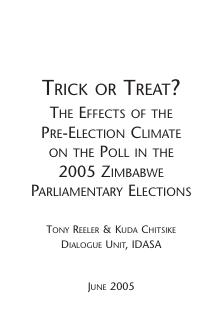 In Zimbabwe, in the past five years, elections have been elevated to the only constitutive principle for determining legitimacy, aided considerably by the position of the African nations, and South Africa in particular. 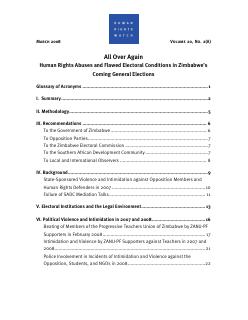 On March 29, 2008, Zimbabweans will participate in presidential, parliamentary, senatorial, and local government elections synchronized for the first time, following changes to Zimbabwe’s constitution in September 2007. As the elections near, all indications are that once again the people of Zimbabwe will not be able to freely exercise their civil and political rights and vote for the candidates of their choice. 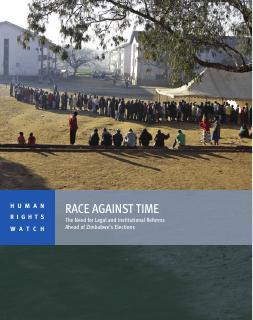 This report assesses the legislative and electoral reforms undertaken by the unity government and analyzes the quality of those reforms and their capacity to create an environment conducive to credible, free and fair elections. Human Rights Watch has found that the contending parties have focused on only one aspect of reforms—securing agreement on the necessary legal and administrative requirements for free and fair elections.

Not a Level Playing Field: Zimbabwe’s Parliamentary Elections in 2005 Human Rights Watch calls on SADC member states to urge the government of Zimbabwe to ensure that in the days remaining before the election, efforts are made to guarantee that all candidates are able to campaign freely and openly throughout Zimbabwe, that all candidates have access to the media, that journalists and observers are allowed to observe the election process in all areas of the country, and that voters are allowed to choose a candidate and vote in an environment free of intimidation. 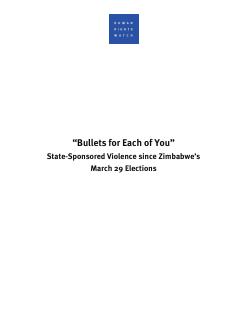 This report, based on investigations in Zimbabwe, describes the scale of the abuses and identifies those responsible—officials from ZANU-PF, often working through proxy forces of so-called war veterans and youth militia, backed by members of the armed forces and police. Local institutions have identified at least 2,000 beatings and cases of torture. 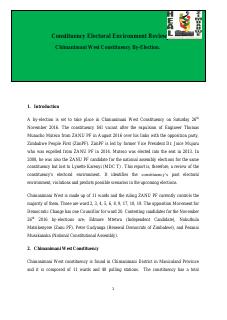 Violence and other forms of violations are expected to be less in Chimanimani West comparatively to the 2008 and 2013 cases. However, it is worrying that unorthodox covert means can be used by the ruling party in a bid to win the elections while in the process violating the people’s right to vote peacefully.

Terror tactics in the run-up to parliamentary elections, June 2000 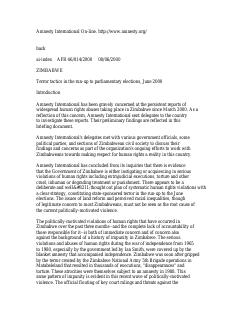 Amnesty International has concluded from its inquiries that there is evidence that the Government of Zimbabwe is either instigating or acquiescing in serious violations of human rights including extrajudicial executions, torture and other cruel, inhuman or degrading treatment or punishment.

Organised Violence and Torture in the Bye-Elections held in Zimbabwe during 2000 and 2001. 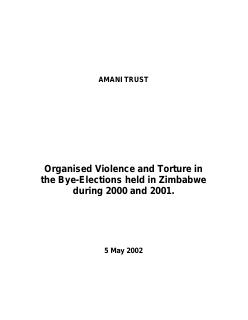 Neither Free nor Fair: High Court decisions on the petitions on the June 2000 General Election. 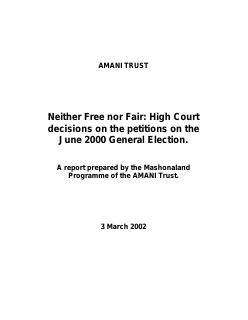 This monograph focuses on the electoral irregularities, including gross human rights abuses, during the period preceding the June 2000 Parliamentary elections. This election marked the first time a strong opposition party, the Movement for Democratic Change (MDC), had challenged the ruling Zimbabwe African National Union – Patriotic Front (Zanu (PF)) in the political arena.

Beating your opposition:Torture during the 2002 Presidential campaign in Zimbabwe. 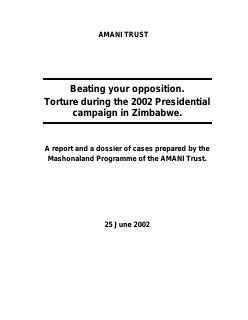 State organized violence increased following the rejection of the Government sponsored constitution in the referendum at the beginning 2000. The violence was initially sporadic and confined to one or two areas at a time but as the 2000 parliamentary elections approached, it became more intense and widespread. The state trained and deployed more people in an effort to control perceived supporters of the newly formed opposition. 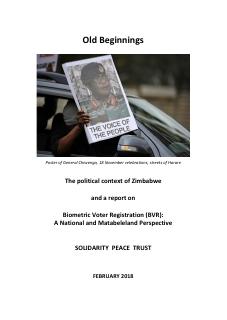 The political context of Zimbabwe and a report on Biometric Voter Registration (BVR):A National and Matabeleland Perspective.The report highlights factionalism in ZANU PF which led to then Vice President E.D Mnangagwa being fired and the stepping down of R.G Mugabe. 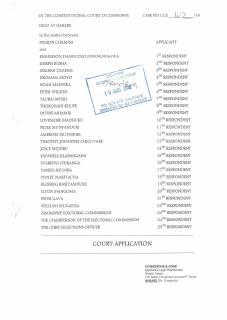