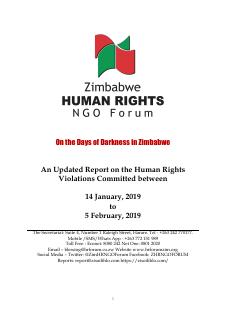 The violations of human rights that started as the state’s response to mass protests on 14 January, 2019 following the increase in fuel prices immediately took a widespread systematic character, the dominant actors being the Zimbabwe National Army (ZNA), the Zimbabwe Republic Police (ZRP) and suspected ZANU-PF militia. The systematic and sustained nature of the violations raises fear that this is becoming a case of crimes against humanity.