Previous 2 / 9 Next
Normal view
2 Background This paper deals with the problem of epidemic violence and its consequences, most notably with the problem of torture, which is a common consequence of epidemic violence. It is located in that most violent of continents, Africa, and in Zimbabwe in particular. Its relevance, in the context of the new South Africa, is to highlight the virtues of Truth and Reconciliation in contrast with the sins of Reconciliation without Truth, which is the Zimbabwean experience. The reference to the medical model and epidemics is to stress the value of a model of disease in considering extreme violence. This is not a new concept (Zwi & Ugalde.1989), but one worth repeating for its descriptive value. From the perspective of the communities who are the recipients of all this ill-health, it often appears as if there is a deliberate attempt to destroy them. After all, modern, low-intensity conflicts have women and children as the most common targets of violence, experiencing injuries and deaths from war and abuse, becoming refugees, and generally witnessing the destruction of their traditional ways of life. Top-down, war is glorious, but bottom-up it is sheer hell. And there is no better place to witness this hell than in the field of working with torture survivors, for it is torture than allows us to see the real purpose behind military spending: the use of naked power to maintain position, the impunity to oppress all opponents, the creation of sustained fear to maintain compliance, and the perpetuation of endemic poverty. This is not merely an African story, but can be seen all over the world, in the endless low-intensity conflicts. This is the story of one the more horrible of all the side-effects of this militarism: torture. The deliberate infliction of harm, and use of abuse to maintain political position and power. It is the story of one District in Zimbabwe, but it is a universal story, currently played out in more than 80 countries of the world according to Amnesty International and the International Rehabilitation Council for Torture Victims. It is the story of one attempt to rehabilitate the survivors, and shows so clearly how easy it is to break or destroy, but how difficult it is to repair and restore. Mount Darwin District Mount Darwin is an administrative district in Mashonaland Central Province of Zimbabwe. Situated in the north-east of the country, this district was very early involved in the Liberation War of the 1970's, with the first attack of the ZANLA forces coming in December 1972 at Althena Farm in Centenary, an adjacent district. After the Althena Farm attack, the security forces instituted severe reprisals against the population that was felt to be supporting the ZANLA forces. Schools, clinics, mills, shops, and beerhalls were closed; property was confiscated and destroyed; collective fines were imposed for failures to report the guerrillas; and mass arrests were made, with detentions and interrogations, involving torture, following. Some crude statistics will illustrate the level of violence. Of 224 persons seen by the AMANI Trust in 1995-1996, 98% report some form of torture. As can be seen from Table 1 below, most had been detained, and a very high percentage reported a family witness to their torture. Table 1. History of detention and witnesses to own torture. DETAINED: Yes 77% No 21% WITNESSES: Adult 39% Children 38% The kinds of torture inflicted were severe, and the average number of different forms of physical torture experienced was high: on average about 5 different forms were reported (see Table 2 over). These bald statistics can only give flavour of the violence, and do not do justice to the impact upon the community.

Epidemic violence and the community: A Zimbabwean case study. 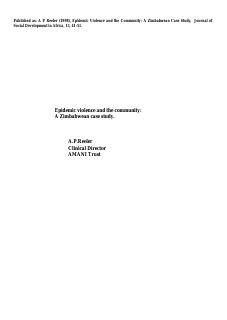