Previous 1 / 3 Next
Normal view
Bill Watch 42/2019 [Mid-Year Budget Review & Supplementary Budget Presented] 04 August 2019 BILL WATCH 42/2019 [4th August 2019] Presentation of 2019 Mid-Year Budget Review & Supplementary Budget Both Houses will Sit Again on Tuesday 6th August On Thursday 2nd August the Minister of Finance and Economic Development, Hon Mthuli Ncube, presented his 2019 Mid-Year Budget Review and Supplementary Budget to the National Assembly. President Mnangagwa attended the presentation. Opposition MDC-A MPs did not [see below]. Budget debate to continue on Tuesday 6th August There was no debate after the Minister's presentation. Debate will continue on Tuesday next week, 6th August, on his motion seeking the leave of the House to bring a Bill to make provision for the revenues and public funds of Zimbabwe and ancillary and incidental matters. MPs, therefore, have four intervening days to digest the Minister's speech and Budget documents, and prepare for the debate. Budget Documents available from Veritas The following documents are available on the Veritas website using the hyperlinks specified: Minister's Budget Speech [link] 2019 Mid-Year Budget Review and Supplementary Budget [link] Budget Highlights [document prepared by the Ministry of Finance and Economic Development] [link] Departmental Draft of the Finance (No. 2) Bill [a Bill to give effect to the taxation measures proposed in the Supplementary Budget that need to be approved by Act of Parliament] [link]. The Blue Book [Supplementary Estimates of Expenditure for 2019] showing the proposed revised vote appropriations for Ministries and other entities – a 129-page book – is not yet available in soft copy. Page 5 of the Budget Highlights document [link], however, contains a handy list of the revised vote appropriations for the Office of the President and Cabinet, Parliament, Ministries, Commissions and other State entities. Exclusion of MDC-A MPs from 1st August proceedings When, before the Budget presentation, Hon Chinotimba raised as a matter of privilege the boycotting of the Budget proceedings by MDC-A MPs because the President would be present, the Speaker made a ruling: THE HON. SPEAKER: “It is unfortunate that the Hon. Members of the main opposition party here in Parliament have decided to boycott this session in which His Excellency the President will be in attendance. There are two issues that we need to put on record. The first one is that His Excellency the President is Head of State and Government and Commander-In-Chief of the Defence Forces. Now, there is some lack of understanding when we say the President is Head of State. The President is Head of State because he is an embodiment of the 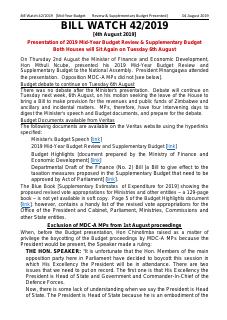 On Thursday 2nd August the Minister of Finance and Economic Development, Hon Mthuli Ncube, presented his 2019 Mid-Year Budget Review and Supplementary Budget to the National Assembly. President Mnangagwa attended the presentation. Opposition MDC-A MPs did not