Previous 1 / 4 Next
Normal view
Bill Watch 33/2019 [Monetary Policy and the Rule of Law] 4th July 2019 BILL WATCH 33/2019 [4th July 2019] Monetary Policy and the Rule of Law SI 142 of 2019 [link] ‒ the Reserve Bank of Zimbabwe (Legal Tender) Regulations, 2019, to give it its full name ‒ declared that the Zimbabwe dollar should be the sole legal tender in Zimbabwe for all transactions. Other currencies, specifically US dollars, British pounds, South African rand and Botswana pula, are no longer legal tender. Since SI 142 was published government officials have made it clear that they believe it is now a criminal offence for storekeepers to price their goods in US dollars or any other foreign currency, and for anyone to use foreign currency rather than Zimbabwe dollars in any transaction carried out in this country. Thus the Governor of the Reserve Bank is reported to have told a parliamentary committee: “There are many tools of enforcing Statutory Instrument 142 of 2019, including the Bank Use Promotion and Suppression of Money Laundering Act (Chapter 24:24), which was approved by the Parliament of Zimbabwe, the Financial Intelligence Unit (within the central bank), and members of the police force who are already seized with the matter to ensure that at least there is compliance and indeed enforceability of this matter. “Enforcement is very possible and they have already started doing so to ensure that all local payments are made in the Zimbabwe dollar, and that payments offshore are done in US dollars.” And the National Police Spokesman is reported as saying: “The ZRP (Zimbabwe Republic Police) warns all those who are charging commodities in United States dollars that they risk being arrested as the law will be applied without fear or favour. Members of the public should report such people to any nearest police station.” Is the Use of Foreign Currency Criminal? It needs to be asserted strongly that, contrary to what the Governor of the Reserve Bank said, it is not a criminal offence to use foreign currency in transactions within Zimbabwe or to price goods in a foreign currency. There are several reasons for this assertion: 1. SI 142 may be invalid At least two cases have been filed in the High Court challenging SI 142 of 2019 on the ground that it is ultra vires the Reserve Bank of Zimbabwe Act, under which it was purportedly made. There is substance in these challenges. The multi-currency system was introduced in 2009 by the Finance (No. 2) Act, 2009, but it was done in rather an odd way. Section 17 of the Act first amended the Reserve Bank of Zimbabwe Act so as to insert a new section 44A which gave the Minister of Finance power to make regulations prescribing that tenders

BILL WATCH 33 2019 Monetary Policy and the Rule of Law 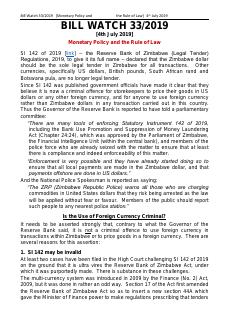 SI 142 of 2019 [link] ‒ the Reserve Bank of Zimbabwe (Legal Tender) Regulations, 2019, to give it its full name ‒ declared that the Zimbabwe dollar should be the sole legal tender in Zimbabwe for all transactions.