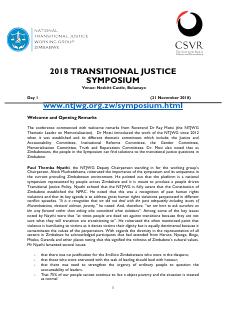 The conference commenced with welcome remarks from Reverend Dr Ray Motsi (the NTJWG Thematic Leader on Memorialisation). There where also remarks from Paul Themba Nyathi, the NTJWG Deputy Chairperson standing in for the working group’s Chairperson, Aleck Muchadehama as well as a speech from Nomfundo Mogapi the Executice Director of CSVR and last but not least, remarks by the Chairperson of the National Peace and Reconciliation Commission, Retired Justice Selo Nare.