Previous 1 / 4 Next
Normal view
Bill Watch 23/2019 Update on Bills and Gazettes 5th to 19th April 22 April 2019 BILL WATCH 23/2019 [22nd April 2019] Both Houses of Parliament are in Recess until Tuesday 7th May Maintenance of Peace and Order Bill Gazetted This Bill [link] was gazetted in the Government Gazette dated 19th April [released to the public on 17th April ahead of the public holidays on 18th and 19th April]. As demonstrated in Bill Watch 22/2019 of 17th April [link] the Bill differs only slightly from the Public Order and Security Act [POSA]. According to the Bill’s supporting memorandum – but not the Bill itself – the Bill will repeal and replace POSA. Zimbabwe Investment and Development Agency Bill This substantial Bill [link] was gazetted on 5th April. It is a major component of the Government’s “ease of doing business” reforms to attract both foreign and domestic investors. If duly enacted by Parliament and assented to by the President, the Bill will become law on the day it is gazetted as an Act. There is no provision for its date of commencement to be fixed by the President by statutory instrument. The Bill’s ten parts include parts dealing with: the establishment, management and finances of the new Zimbabwe Investment and Development Agency [ZIDA] and its One Stop Investment Services Centre [OSISC]; investor guarantees and non-discriminatory treatment; investor obligations, including social responsibility; provisions common to investors in and outside Special Economic Zones; investment and other activities in Special Economic Zones [details in the Third Schedule]; Public Private Partnerships [details in Fourth Schedule]; and dispute settlement. ZIDA will replace, and take over the functions presently entrusted to, the Zimbabwe Investment Authority and the Special Economic Zones Authority [both statutory corporations] and the Joint Venture Unit in the Ministry of Finance and Economic Development, which advises Government on Public Private Partnerships. All this will require adjustments to existing legislation: • repeal of the Zimbabwe Investment Authority Act, Special Economic Zones Act [link] and Joint Venture Act [link]; • amendment of the Procurement and Disposal of Public Assets Act [link] to align it with the new arrangements for Public Private Partnerships. Transitional provisions are also necessary to provide for the succession of ZIDA to the bodies it will replace and to their assets and obligations. Clause 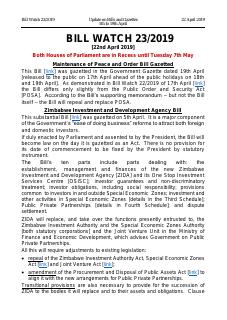