Previous 1 / 3 Next
Normal view
Bill Watch 30/2019 Tripartite Negotiating Forum Act Gazetted 11 June 2019 and Coming Up in Parliament This Week BILL WATCH 30/2019 [11th June 2019] Both Houses will be Sitting This Week Tripartite Negotiating Forum Act Gazetted and in Force The Tripartite Negotiating Forum Act, 2019 (Act No. 3 of 2019) was gazetted and came into force on Tuesday 4th June [Government Gazette Extraordinary dated 4th June 2019]. It can be downloaded from the Veritas website [link]. Coming up in the Senate This Week Bills No Bills are listed on the Senate’s Order Paper for its first sitting of the week, which will be this afternoon, Tuesday 11th June. Two Bills may, however, reach the Senate in time for Senators to start considering them on Wednesday – the Consumer Protection Bill and the Microfinance Amendment Bill. Both these Bills are likely to be finalised by the National Assembly and transmitted to the Senate today [see below, under Coming up in the National Assembly]. Motions Debate is due to continue on four motions requesting the Senate to take note of the following reports, of: • the Speaker on his Bilateral Visit to the Shura Advisory Council, Doha, Qatar from 30th March to 4th April • the delegation to the AfrEA Conference on Monitoring and Evaluation held in Abidjan, Cote d’Ivoire from 11th to 15th March • the Thematic Committee on Human Rights on the Zimbabwe Human Rights Commission [ZHRC] for 2017 • the delegation to the 44th Plenary Assembly of the SADC Parliamentary Forum in Maputo, Mozambique from 6th November to 8th December 2018. PLC’s Adverse Report on the Command Agriculture Regulations, 2018 The Senate has been waiting to finalise this item for three months, having discussed this adverse report by the Parliamentary Legal Committee [PLC], which expressed the PLC’s opinion that SI 247/2018 [link] unconstitutionally criminalises breaches of contract by command agriculture beneficiaries. All Senators who spoke said the provisions concerned should be struck down. It was decided, however, that the responsible Minister, the Minister of Lands, Agriculture, Water, Climate and Rural Resettlement, should be given a reasonable opportunity to defend the provisions before the Senate,. If the Minister fails to appear this week, Senators may decide that the time has come to vote on the adverse report without hearing from him. 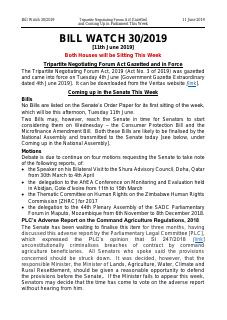