Previous 1 / 6 Next
Normal view
DISTRIBUTED BY VERITAS e-mail: veritas@mango.zw www.veritaszim.net Veritas makes every effort to ensure the provision of reliable information, but cannot take legal responsibility for information supplied The following report was presented to the National Assembly of Zimbabwe on 13th May 2014 by Hon Paurina Mpariwa, MP. REPORT OF THE CONFERENCE OF WOMEN PARLIAMENTARIANS ON VIOLENCE AGAINST WOMEN AND GIRLS 1.0 Introduction 1.1 The Conference of Women Parliamentarians took place at the precincts of the PanAfrican Parliament in Midrand South Africa on 1st and 2nd November, 2013 under the Theme: “Parliamentarians Responding to Violence against Women and Girls in Africa, from Legislation to Effective Enforcement”. 1.2 The Zimbabwe delegation comprised the following:a) Hon. Sarah Mahoka, Member of Parliament; b) Hon. Paurina Mpariwa, Member of Parliament; c) Hon. Priscah Mupfumira, Member of Parliament; and d) Ms. Rudo N. E. Doka, Director – External Relations and Secretary to the delegation. 1.3 It has been noted with concern that Violence Against Women and Girls (VAWG) is a pandemic of serious proportions in Africa taking various forms, often reflecting the political, social, cultural and economic diversities of our societies, cutting across borders, race, class, ethnicity and religion. 1.4 Today, violence against women and girls is increasingly recognised as a threat to democracy; a barrier to lasting peace; a burden on national economies, an impediment to sustainable development; and appalling human rights violation. Violence against women, according to analysts reduces the countries’ ability to harness the full potential of their citizens for sustainable and equitable development. 2.0 Background 2.1 Women and men of all ages are victims of violence and human rights violations, but specific cases of these violations are committed almost solely against women and girls. However, the plight of these women and girls frequently goes unnoticed because in many different ways across cultures, they are treated with less regard than men. Africa has had a long standing tradition of unequal power relations between men and women leading to an extremely high rate of violence against women beginning in childhood. 2.2 The United Nations (UN) defines violence against women as, ¡§any act of gender based violence that results in or is likely to result in physical, sexual or psychological harm or suffering to women, including threats of such acts, coercion or arbitrary deprivation of liberty, whether occurring in public or in private life¡¨. (United Nations Declaration on the Elimination of Violence against Women 1993). 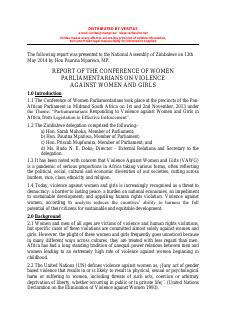 The Conference of Women Parliamentarians took place at the precincts of the PanAfrican Parliament in Midrand South Africa on 1st and 2nd November, 2013 under the Theme: “Parliamentarians Responding to Violence against Women and Girls in Africa, from Legislation to Effective Enforcement”.