Previous 1 / 4 Next
Normal view
Bill Watch 31/2019 Progress on Bills 21 June 2019 BILL WATCH 31/2019 [21st June 2019] Progress on Bills 11th – 21st June Next Sitting of National Assembly: Tuesday 25th June Next Sitting of Senate: Tuesday 16th July Both the National Assembly and the Senate sat last week and this week. Two Bills were passed and progress made on two others. Bills Passed Consumer Protection Bill Following the announcement of the PLC’s non-adverse report on the extensive Committee Stage amendments made previously, the National Assembly passed the amended Bill on 13th June. The amendments [link] upgrade the proposed Consumer Protection Agency from a department of the Ministry of Industry and Commerce to a fully-fledged Commission called the Consumer Protection Commission that will be independent and not merely part of the Ministry. The Bill was then sent to the Senate. Microfinance Amendment Bill. This Bill, too, received a non-adverse report from the PLC on the Committee Stage amendments made previously [link]. The National Assembly passed it on 13th June and sent it to the Senate. As both Bills had been passed by the National Assembly with amendments, Senators were provided with reprinted versions of the Bills incorporating those amendments. On Tuesday 18th June, in the absence of the responsible Ministers [Industry and Commerce, and Finance and Economic Development] the Minister of Justice, Legal and Parliamentary Affairs steered both Bills through all stages, delivering the Second Reading speeches and moving the required motions. Senators did not raise any substantive issues or engage in debate or suggest amendments but passed both Bills as received from the National Assembly. The Bills will now be prepared for signing by the President and then gazetted as Acts. Bills Still in the National Assembly – but Making Progress Zimbabwe Investment and Development Agency Bill [link] This Bill [the “ZIDA Bill”] was given its First Reading and sent to the Parliamentary Legal Committee [PLC] on 9th May. The PLC’s non-adverse report was announced on 13th June. The Second Reading stage started in the National Assembly on Tuesday 18th June, when the Minister of Justice, Legal and Parliamentary Affairs – having just steered two Bills through the Senate as related above, and again standing in for the absent Minister of Industry and Commerce – presented the Second Reading speech outlining the objectives of this Bill in support of the motion that the Bill be read for the second time, i.e., approved in principle. Debate was then adjourned to await the report of the Portfolio Committees on Industry and Commerce and Foreign Affairs and International Trade on their joint public hearings on the Bill held from 3rd to 7th June. 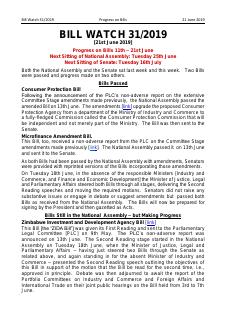 Both the National Assembly and the Senate sat last week and this week. Two Bills were passed and progress made on two others.