Previous 2 / 10 Next
Normal view
Rights, the Constitution guarantees every Zimbabwean the right to life (Section 48), right to education (Section 75), right to health care (Section 76), right to food and water (Section 77), children’s rights (S. 81), rights of the elderly (Section 82), rights of persons with disabilities (Section 83) as well as environmental rights (Section 73). Zimbabwe is also a signatory to the United Nations Framework Convention on Climate Change (UNFCCC)- (among many others), which in its Article 3 obligates States to take precautionary measures in order to anticipate, prevent or minimize the causes of climate change and mitigate its adverse effects. In addition, the UN Guidelines on Internal Displacement provide that, the primary duty and responsibility to provide protection and assistance lies with the State. People affected by natural disasters have the right to request and receive such protection and assistance from their Governments. The effects of climate change induced disasters such as cyclones directly and indirectly threaten the full and effective enjoyment of human rights, including the rights to life, water and sanitation, food, health, education, housing, and rights associated with livelihood and culture; with migration and resettlement; and with personal security. During the monitoring exercise, the ZHRC interacted with Government officials such as the Minister of State for Manicaland Province Honourable Ellen Gwaradzimba and her team of government officials at provincial and district levels that include Manicaland Provincial Administrator, Chimanimani and Chipinge District Administrators. The team also interacted with Social Welfare Officers and the Zimbabwe National Army (ZNA) Search and Rescue Team. The Commission also engaged with the Member of Parliament for Chimanimani East, Honourable Joshua Sacco, Chimanimani Town Council Chief Executive Officer and the Deputy Council Chairperson. The ZHRC also interviewed representatives of non – State actors working on the ground such as NonGovernmental Organisations, Community Based Organisations, private companies and individuals assisting victims; ruling and opposition party officials and members from the affected districts. Further, ZHRC interacted with the 2 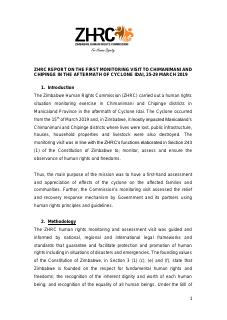 The Zimbabwe Human Rights Commission (ZHRC) carried out a human rights situation monitoring exercise in Chimanimani and Chipinge districts in Manicaland Province in the aftermath of Cyclone Idai.