Previous 1 / 2 Next
Normal view
NTJWG Statement on International Day of Peace Confronting New Barriers to Peace “Today peace faces a new danger: the climate emergency, which threatens our security, our livelihoods and our lives.” UN Secretary-General António Guterre The NTJWG join the rest of the world in commemorating the International of Peace. Each year the International Day of Peace is observed around the world on 21 September. The General Assembly has declared this as a day devoted to strengthening the ideals of peace, both within and among all nations and peoples. The United Nations Member States adopted the 17 Sustainable Development Goals in 2015 in a drive to ensure that a peaceful world is based economic and social development for all people everywhere, and ensure that their rights were protected. The Sustainable Goals cover a broad range of issues, including poverty, hunger, health, education, climate change, gender equality, water, sanitation, energy, environment and social justice. Sustainable Development Goal 13 “Climate Action ” is a call for immediate action by all to lower greenhouse emissions, deforestation, and natural disasters, build resilience and improve education on climate change. Affordable, scalable solutions such as renewable energy, clean technologies are available to enable countries to adopt greener, efﬁcient and more resilient economies. This year’s theme 2019 Theme: “Climate Action for Peace” resonates well with the effects of climate change in Southern Africa. Tropical Cyclone Idai swept through and made landfall during the night of 14 to 15 March 2019 near Beira City, Sofala Province, in central Mozambique. The cyclone brought torrential rains and winds to Sofala, Zambezia, Manica and Inhambane provinces. Even though warnings were issued, Governments in the region did not do enough to evacuate people. The strength of the storm gained more strength as it crossed land. However, it continued to bring strong winds and heavy rains as it made its way across central Mozambique and into eastern Zimbabwe. Southern Malawi received heavy rains in the days prior to the cyclone landfall. Most parts of the Eastern Highlands in Zimbabwe and Central Mozambique were severely affected by the cyclone. Close three million people were affected by the ﬂoods and caused at least 678 deaths in Malawi, Mozambique and Zimbabwe. In Malawi, about 868,900 people have been impacted, with 59 deaths and 672 injuries recorded , according to the government. Nearly 87,000 people are estimated to be displaced. While rapid needs assessments have been conducted in Nsanje and Phalombe districts, they continue in Machinga, Mangochi and Zomba to verify initial estimates and determine the total number of people in need of immediate humanitarian assistance. In Mozambique, about 1.85 million people have been affected, with at least 447 deaths. Nearly 129,000 people have been accommodated in 143 sites across Sofala (103 sites), Manica (26 sites), Zambezia (10 sites) and Tete (4 sites), as of 25 March, 2019. Health and education facilities have suffered signiﬁcant damage, with more than 3,100 classrooms and 45 health centres impacted. Some 72,260 houses have been totally destroyed , partially destroyed or ﬂooded, according to Government reports (2019). In addition, more than 474,150 hectares of crops have been damaged , which will impact food security in the months ahead, particularly as the losses coincide with the annual harvest period.

Statement on International Day of Peace 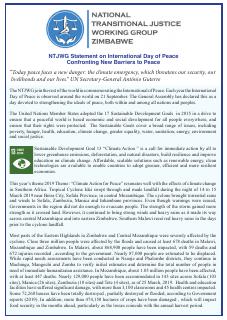