Previous 1 / 2 Next
Normal view
MEDIA RELEASE STATEMENT ON ACTIVITIES AND OBSERVATIONS MADE DURING THE PRE-ELECTION PERIOD OF THE 2018 GENERAL ELECTION The Zimbabwe Human Rights Commission (ZHRC/Commission), in line with its monitoring mandate as provided for in Section 243(1)(c) of the Constitution of Zimbabwe, deployed monitors throughout the country’s 10 Provinces. The monitoring activities which have been undertaken by the ZHRC project a holistic picture of the electoral environment; Since 2017, the Commission has carried out various monitoring activities starting with the Biometric Voter Registration (BVR) process where cases of the recording of BVR slips were reported and investigated. The Reports have been shared with Zimbabwe Electoral Commission (ZEC) and made public on the ZHRC website. The ZHRC went on to monitor primary elections for two political parties, the Zimbabwe African National Union – Patriotic Front (ZANU-PF) and the Movement for Democratic Change (MDC) Alliance. The ZHRC noted the use of hate speech and some intimidation in the various campaigns and recommended that the parties desist from such behaviour. The reports on the primaries are available from the Commission and on the website. The Nomination Court processes were monitored throughout Zimbabwe from 11 to 15 June 2018 and noted that ZEC had been well prepared before the Nomination Day in some Provinces whilst there were delays in others. The ZHRC welcomes the acceptance of its recommendations by ZEC. In order to promote the right to vote as stated in Section 67 of the Constitution, the ZHRC launched the “My Vote, My Right, My Choice” campaign which was well received based on feedback from citizens. As a result of the campaign, that also publicised the Commission’s hotlines, social media platforms and the website, there was an influx of complaints and inquiries and heightened interaction between the Commission and the public. The ZHRC carried out pre-election monitoring in the following Provinces: Midlands, Mashonaland East and Matabeleland North from 4-8 July 2018 and Mashonaland Central, Bulawayo and Manicaland from 10-13 July 2018, attended 5 ZANU PF and 5 MDC Alliance rallies in Mashonaland East, Midlands and Matabeleland North during the process. At some of the rallies, hate speech and character assassination was rampant but the right to campaign freely for a political party or cause was not infringed. From the above activities the ZHRC notes the following: That there is prevailing peace and tranquillity in various Provinces with some isolated cases of electoral malpractice such as the defacing of posters, hate speech and intimidation. The ZHRC notes the actions that have been taken by the ZRP and the courts to ensure that perpetrators who deface posters are penalised in accordance with the Electoral Act [Chapter 2:13]; 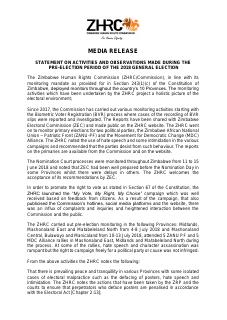