Adding insult to injury. A Preliminary Report on Human Rights Violations on Commercial Farms, 2000 to 2005. 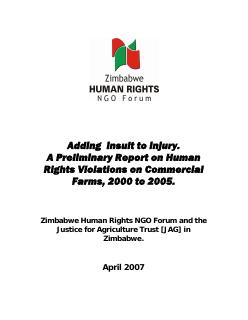 Widespread human rights violations were inflicted upon white farmers and black farm workers by agents of Zimbabwean President Robert Mugabe’s government during the seizures of whiteowned farms from 2000 to 2005.