Previous 1 / 1 Next
Normal view
2018 TRANSITIONAL JUSTICE SYMPOSIUM SUMMARY REPORT the world is watching, Africa is watching… As we see the story of a nation that has decided to “ Zimbabwe, stand up again And declare ‘Never Again!’ May ‘Never Again’ echo in every single corner of your nation. INTRODUCTION From 21 to 23 November 2018, over 118 delegates converged in Bulawayo for the 2018 Transitional Justice Policy Symposium which was jointly convened by the National Transitional Justice Working Group (NTJWG) and the Centre for the Study of Violence and Reconciliation (CSVR). The theme of the symposium was, ‘Never Again: Setting the Transitional Justice Agenda for Zimbabwe.’ The symposium was designed to give Zimbabweans an opportunity to reflect on the most urgent transitional justice needs of the country and contribute to the development of a proposal for a transitional justice policy for Zimbabwe. A transitional justice policy for Zimbabwe allows the country to join the continent in putting in place measures to ensure that past atrocities are dealt with, victims find redress and closure. It further ensures that mechanisms are put in place to spur and drive national commitment to say ‘Never Again’ to violence. Nomfundo Mogapi, Executive Director, CSVR The Never Again Movement Saying ‘Never Again’ to violence requires more than eloquent speeches and slogans. It requires a national commitment, expressed in concrete measures that transform a culture by uprooting all the seeds of violence and creating mechanisms for peaceful transformation of conflicts and opening the avenues of truth, justice and accountability to the many individuals, families and communities affected by past conflicts. In acknowledging the extreme importance of this vision, the symposium brought together delegates from a cross section of leaders in Zimbabwe, including civil society, churches, business, legislators, academics, international experts, traditional leaders, community elders, development partners, independent commissions and most importantly, survivors of past atrocities. Reflections Over the course of three days, delegates reflected on Zimbabwe’s transitional justice journey dating back to the colonial era, a series of struggles that have seen us as a nation to where we are today. In the second day, delegates travelled to six key sites of different atrocities in Matebeleland where they came face to face with the ugliness of violence and the horrors of non-closure. Survivors of past atrocities were brave enough to open wide their homes and hearts to the groups and to share their deepest angers, fears and hopes. Converging at the Amagugu International Heritage Trust in Matopo, reflections from families searching for closure continued with a very touching theatre performance by Victory Siyanqoba Trust, titled, “Someone Lied.” The performance was followed by a candid dialogue around how the Matebeleland transitional justice questions can be addressed and the role of government in it. Day three was the wrap up, focusing on concrete policy reflections and processes necessary to say and guarantee ‘Never Again!’ Thousands of Zimbabweans across the world joined the conversation through the #NeverAgainZW which started trending one hour into the symposium until three days after the end of the conference, reaching mention reach of 3.66 million people. Policy Options The symposium put on the table a cocktail of several policy measures which can be pursued to see the reality of ‘Never Again’ in Zimbabwe. The proposals included: Ÿ Approaches to promote truth telling, truth seeking, truth recovery and truth preservation. This included the role of archives and how such a process ought to be designed to capture the reality of what happened and facilitate healing . It was noted that archiving is not a Scan code to see question of the past issues Siphosami Malunga’s Address at the Symposium but the future responsibilities that should be carried by the government and stakeholders; Ÿ The centrality of security sector transformation to promote increased citizen security. Proposals were put on the table for a comprehensive transformation programme aimed at reconfiguring the relationship between the people of Zimbabwe and their security services for increased citizen safety. Key principles to include: knowledge-based professional implementation, transparency and political impartiality, inclusive dialogue with all stakeholders and consensus - based national ownership; Ÿ While there is an aversion for amnesties because of their history of promoting impunity, delegates noted that a deeper and more analytical dialogue on amnesties is unavoidable if a real inclusive transformative justice process is to succeed; Ÿ Cutting across all themes, is the question of designing a transitional justice policy to achieve gender justice beyond the two binaries of men and women or boys and girls and taking into consideration social constructs, systems and structures that perpetuate patriarchy and create harmful and atrocious power relations; Ÿ Across the different thematic policy reflections, the symposium emphasised the critical role of independent commissions in ensuring the success of the transitional justice policy for Zimbabwe. CONCLUSION   Detailed reports available on www.ntjwg.org.zw/symposium.html For any further inquiries Email: info@ntjwg.org.zw Whats App: +263 782 767 569 The symposium tasked the NTJWG with decoding the rich content generated in the three days to develop a policy document that would help make a reality the vision painted by the delegates. In closing the symposium, NTJWG Chairperson Mr. Alec Muchadehama said that the goal of a transitional justice policy for Zimbabwe is to build a national architecture for compassion. “A transitional justice policy means we want a value system that says ‘the wounded must be healed’ to be government's way of doing business.” 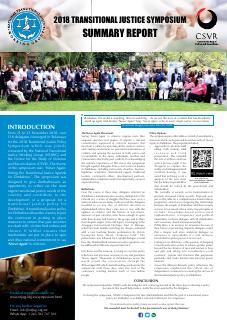