Previous 2 / 29 Next
Normal view
1. Background The Zimbabwe Human Rights NGO Forum [the “Human Rights Forum”] issued a report in July 2008 analysing the reports received during April 2008. 2 In this report, the Human Rights Forum made the very strong allegation that the Government of Zimbabwe is complicit at the least in the commission of Crimes against Humanity. The Human Rights Forum had earlier issued a report on the post-election violence in which it raised this allegation. As the Human Rights Forum stated: So the suggestion that crimes against humanity – the widespread, systematic and planned use of torture – are being perpetrated by a regime that may well no longer have a legitimate basis for continuing in government (and may well be avoiding handing over government) is a situation that deserves a more determined response from SADC and the AU than has been the case to date.3 This allegation was given deeper consideration in the July report, and, in this report, the Human Rights Forum concluded as follows: Thus, the evidence before the Human Rights Forum corroborates all the recent reports, and indicates that state agents and supporters of ZANU PF are allegedly the preponderant perpetrators of these violations. The responsibility of the Zimbabwe government for protecting its citizens’ stands seriously questioned, and even more so given the utterances of the most senior government and political figures that there is a situation akin to a war.4 There is an urgent need for the international community, and especially SADC, to bring the strongest possible pressure to bear on the Zimbabwe government to obey its constitutional responsibility, to ensure that all state agents act within the law, and that all proxy militia groups and party supporters are brought under civilian control, and, if this last is not possible, then there is the need for an international peace keeping force as some international leaders have suggested. All evidence showed that the situation worsened in the aftermath of the highly disputed Presidential Run-off, and the rejection of the result by many countries, not least of all by a number of African countries – Botswana, Rwanda, Nigeria, Sierra Leone, and Senegal – with even a call by the Kenyan Prime Minister, Raila Odinga, for a peace keeping force to be deployed in Zimbabwe. Furthermore, three of the major election observer groups – from the AU, the Pan-African Parliament, and SADC – indicated unequivocally that the Presidential Run-off fell short of acceptable standards, citing the 2 See Zimbabwe Human Rights NGO Forum (2008), Damn Lies? Gross human rights violations during April 2008. Report produced by the Zimbabwe Human Rights NGO Forum and the Research & Advocacy Unit. 10 July 2008. HARARE: ZIMBABWE HUMAN RIGHTS NGO FORUM. 3 See again Human Rights Forum (2008), Can the elections in Zimbabwe be Free and Fair? Paper produced by the Research and Advocacy Unit [RAU] for the Human Rights Forum, HARARE: ZIMBABWE HUMAN RIGHTS NGO FORUM [page 11]. 4 These statements and utterances by the Zimbabwe government and ZANU PF are not new, however, and have been a consistent feature of the political landscape in Zimbabwe since 2000. See here Zimbabwe Human Rights NGO Forum (2007), Their Words Condemn Them: The Language of Violence, Intolerance and Despotism in Zimbabwe, May 2007, HARARE: ZIMBABWE HUMAN RIGHTS NGO FORUM.

“Resolute action to immediately revive the grassroots structures?” Or Crimes Against Humanity? 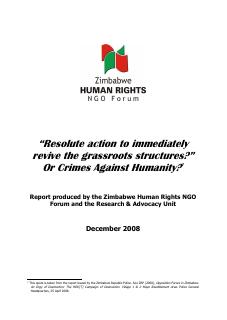 In this report, the Human Rights Forum made the very strong allegation that the Government of Zimbabwe is complicit at the least in the commission of Crimes against Humanity.