Previous 1 / 2 Next
Normal view
First UA: 124/19 Index: AFR 46/1059/2019 Zimbabwe Date: 18 September 2019 URGENT ACTION MEDICAL DOCTOR ABDUCTED FROM HIS HOME Dr Peter Magombeyi, a medical doctor and Acting President of the Zimbabwe Hospital Doctors Association (ZHDA), was abducted on the night of 14 September. He had been receiving threats from suspected members of the Central Intelligence Organisation warning him to stop his involvement in a doctor’s strike and, failure to do so, would result in his enforced disappearance. Following a habeas corpus application, the High Court has ordered an investigation into his disappearance. However, to date, no action has been taken and Dr Peter Magombeyi’s whereabouts remain unknown. TAKE ACTION: WRITE AN APPEAL IN YOUR OWN WORDS OR USE THIS MODEL LETTER His Excellency President Emmerson Mnangagwa Munhumutapa Building Private Bag 7700 Causeway, Harare Zimbabwe Email: info@opc.gov Your Excellency President Mnangagwa, I write to you to express my deep concern for the fate and whereabouts of Dr Peter Magombeyi, a medical doctor and Acting President of the Zimbabwe Hospital Doctors Association (ZHDA) who was abducted by three unidentified armed men on 14 September from his home in Budiriro, Harare. No information about his whereabouts has been provided and I fear that he is at risk of torture and other ill-treatment. The High Court ordered the Minister of Home Affairs and the Minister of State for National Security to determine the whereabouts of Dr Peter Magombeyi and to set up a team of investigators to search for him. The two Ministers were also ordered to advertise details of the missing ZHDA President. Dr Peter Magombeyi’s abduction adds to the number of other unresolved enforced disappearances in Zimbabwe. In some cases, victims of abductions have often later been found in state custody, despite denials of involvement in their enforced disappearance by the authorities. It is critical that you and your Government take concrete and meaningful steps to locate and reveal information about his fate and whereabouts. Therefore, I urge you as Head of State to: - - Direct the Minister of Home Affairs, the Minister of State for National Security and all state security agents to take all necessary action to establish the circumstance of the disappearance and to reveal the fate and whereabouts of Peter Magombeyi; and to comply with the High Court Order; Ensure the release of Dr Peter Magombeyi; Take steps to ensure thorough and effective investigations of all cases of enforced disappearances in Zimbabwe, ensure that those suspected to be responsible are brought to justice and that the victims and their families have access to justice and effective remedies which include restitution, compensation, rehabilitation, satisfaction and guarantees of non-repetition. Yours sincerely,

MEDICAL DOCTOR ABDUCTED FROM HIS HOME 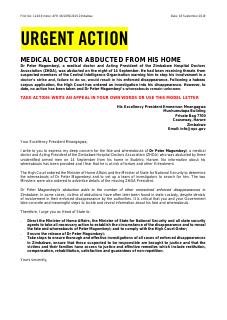 Dr Peter Magombeyi, a medical doctor and Acting President of the Zimbabwe Hospital Doctors Association (ZHDA), was abducted on the night of 14 September.