Previous 1 / 13 Next
Normal view
Paper presented to: 2nd National Conference on Victim Empowerment, “Ten Years of Democracy: From Victims’ Needs to Victims’ Rights?” 31 August to 2 September 2004, ICC, Durban, Themba LeSizwe. Militarised Youth in Zimbabwe. A P Reeler Human Rights Defender, Idasa. Summary: The problems of militarised youth are well known in Africa. The use of youth militia in “informal repression” is perhaps less well known than in the use of child soldiers in civil conflicts, but informal repression is increasingly becoming a serious problem in Africa. Many reports have emerged from the current Zimbabwe crisis indicating that youth militia have had a significant role in the informal repression that has taken place since February 2000. Much of the evidence is related to violence and intimidation around elections, but there is also significant evidence suggesting that the National Youth Service programme, initiated in 2001, is the basis for the sustained use of youth militia. This paper examines the phenomenon of youth militia in Zimbabwe, and contrasts this use of the youth with the views and opinions of ordinary young Zimbabweans Background: The phenomenon of very young people, and even children, participating in war is as old as history itself, but it is only in the 20th Century, together with the general social recognition that children require protection, that attempts have been made to increase the age at which young persons can be combatants. This is now generally recognized in international law, and given effect in a number of human rights standards. The UN Convention on the Rights of the Child, now ratified by all countries except the US and Somalia, gives effect to this general recognition, whilst the Optional Protocol on the involvement of children in armed conflict, which came into effect in 2002, recognizes that children under the age of 15 should not be involved in military activities. The international community is now being pressured to raise this age to 18. However, this general recognition has had many transgressions, and some of these transgressions have been frankly horrifying. The use of very young soldiers and cadres by the 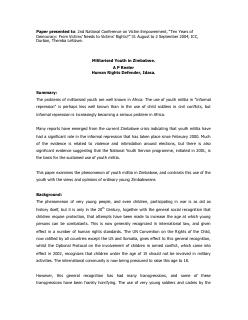 This paper examines the phenomenon of youth militia in Zimbabwe, and contrasts this use of the youth with the views and opinions of ordinary young Zimbabweans