No War in Zimbabwe 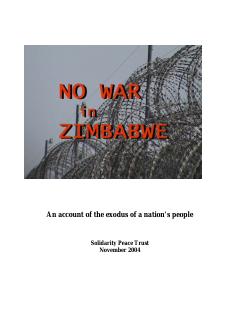 Zimbabweans are now the second biggest group of foreign Africans in South Africa. Yet there is little formal information available on their situation. Very few are being officially recorded as political refugees. Some Zimbabweans claim that it is hard to access asylum seeker status. It was the intention of the authors to investigate these allegations, as well as to establish other problems and issues of relevance to Zimbabweans in South Africa.