Previous 1 / 2 Next
Normal view
First UA: 76/19 Index: AFR 46/0450/2019 Zimbabwe Date: 31 May 2019 URGENT ACTION SEVEN ACTIVISTS ARRESTED, CHARGED WITH TREASON Seven activists, arrested on different dates, are facing charges of treason after they attended a training organised by the Center for Non-Violence Action and Strategies (CANVAS) in the Maldives. Five of the activists have already appeared in court and are remanded in custody until 6 June. The offence ‘subverting a constitutional government’ carries a penalty of up to 20 years in prison. These arrests are part of an ongoing crackdown on human rights defenders, activists and opposition members in the country and are an attempt by the government to stifle peaceful protest over the recently implemented austerity measures. TAKE ACTION: WRITE AN APPEAL IN YOUR OWN WORDS OR USE THIS MODEL LETTER President Emmerson Mnangagwa Munhumutapa Building Corner Sam Nujoma / Samora Machel Harare, Zimbabwe Email: info@opc.gov.zw Your Excellency President Mnangagwa, I am concerned with the arbitrary arrest and trumped up charges against George Makoni, Tatenda Mombeyarara, Gamuchirai Mukura, Nyasha Mpahlo, Farirai Gumbonzvanda, Sitabile Dewa and Rita Nyamupinga. All seven activists have been charged with ‘subverting a constitutional government’ under Section 22 (2) of Criminal Law (Codification and Reform Act) which attracts a sentence of more than 20 years in prison for attending a training on civic engagement, advocacy and communications in the Maldives from 15 – 17 May. These human rights defenders are being persecuted simply for attending a training on non-violent activism. I am also worried about the ongoing government crackdown on human rights defenders, activists and opposition members. Since the January 2019 protest, authorities continue to intimidate and harass activists, and threaten the rights to freedom of association, peaceful assembly and expression to silence any dissent. Your Excellency, you have an opportunity to ensure that the government breaks away from the past by ensuring the authorities promote and protect human rights. I call on you to:  Ensure that charges against seven activists are dropped immediately;  Ensure the immediate and unconditional release of all prisoners of conscience detained solely for peacefully exercising their human rights;  Ensure an end to the crushing of dissent through judicial persecution of human rights defenders, activists and opposition members perceived to be opponents of the ruling party in Zimbabwe;  Ensure respect for the rights to freedom of association, peaceful assembly and expression as enshrined in the Constitution and human rights treaties to which Zimbabwe is a state party. Yours sincerely, 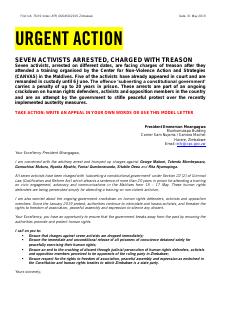 Seven activists, arrested on different dates, are facing charges of treason after they attended a training organised by the Center for Non-Violence Action and Strategies (CANVAS) in the Maldives.