Previous 1 / 1 Next
Normal view
Delays in honouring judgements - Justice Delayed is Justice Denied The Zimbabwe Human Rights NGO Forum envisions a society which promotes and protects all human rights of all people. The Forum continues its eﬀorts to ensure that human rights violations perpetrated by the police and the military are brought to light to foster an end to the culture of impunity. We note with great concern the reluctance by the government to prioritize victims of such violations. Impunity for human rights violations such as extra-judicial killings, assault, torture, abductions, sexual violence etc, have long-lasting adverse eﬀects which interfere with victims' right to enjoy a ful lling life which the government has an obligation to protect. Failure by the government to honour court judgments in favour of victims of human rights violations by the police and the military, a agrant human rights violation In the Forum's anti-impunity media alert published in the Standard of 30 June 2019, we published a schedule of outstanding judgment debts which the State is yet to honour. There are at least thirty (30) judgments of cases varying from assault, torture, unlawful arrest and detention, gunshot wounds and extra-judicial killings. The amounts that are owed are sounding in United States Dollars and the moribund Zimbabwe dollar. The judgments were issued between 1999 and 2016 spanning over a period of seventeen (17) years, and the government has not honoured the judgments or at the very least indicated an intention to honour the judgments. With the economic challenges and changes that Zimbabwe has gone through, the judgments that were awarded to victims do not at the very least meet the medical expenses, pain, shock and suﬀering that these victims were subjected to. The ght against impunity is not only a legitimate moral struggle for human rights but also a basic need for the sustainable recovery of survivors . It is important that victims receive compensation as much as it is important that justice is delivered. There is a need for the government to admit to its wrongdoing and put in place measures to avoid a repeat of such violations. Failure to do so shields the security services creating an environment where such human rights violations can be perpetrated without consequence. An important aspect is that due to the failure by the government to honour judgments the amounts awarded have lost in value and execution of these awards will require that the courts quantify the value in the year awarded vis a vis the value of the current monetary policy. The consequences are, therefore, far-reaching. To show the impact that victims of such human rights violations suﬀer, in the Newsday online of May 2019, one of our clients told his story. He is a man aged 31 years old, who was shot on both legs by the police in a case of mistaken identity during an investigation into the theft of a motor vehicle in 2010. The High Court awarded him US$21 367 in 2012. The government only honoured this award in May 2019, some seven (7) years after the award. While the court would have considered the value of the money when the award was made, the delay by the government in honouring the judgment resulted in the award not being of much value to compensate him for his medical expenses and general damages for pain, shock and suﬀering. He now walks on a prosthesis and clutch meaning that he will continue to incur medical expense which the award did not factor in. He noted with great concern that the compensation just considered receipted costs, which he incurred disregarding future medical expenses as he now has a permanent disability. We, therefore, urge the government to ensure that they honour judgments of the courts timeously to counter the changes in the economy and also to ensure that victims can work towards a journey of recovery. The right to life is a fundamental human right protected under section 48, and it should be protected to allow that all persons enjoy this right to the fullest. Further, a decision of the court is binding on the government, and in terms of section 44 of the Constitution, the State and every institution and agency of the government at every level must respect, protect, promote and ful l the rights and freedoms protected in the Bill of rights. Community Monitoring On 24 June 2019, the government gazetted Statutory Instrument 142/ 2019 which reintroduced the Zimbabwean dollar and prohibited the use of the multi-currency system in Zimbabwe. We note with great concern the uncertainty that has arisen as a result of this change in monetary policy. We also note that there has not been any indication at law that the continuous use of the foreign currency to transact is an oﬀence that is subject to a penalty. It is important that the Reserve Bank of Zimbabwe and the Ministry of Finance make eﬀorts to provide clear communication to the people to avoid arbitrary arrests as was reported in some business centres in Harare. The Forum urges the government to protect human rights and ensure that justice prevails as sanctioned by the rule of law and the Constitution of Zimbabwe. The Forum encourages citizens to be vigilant and report human rights violations by the security services using our platforms. Report violations by the Security Services Call – Econet Toll-Free: 08080 242 NetOne Toll-Free: 08012 020 SMS: - Econet: 772 411 124 NetOne: 0712 844 954 Ushahidi Whatsapp: 0772 411124 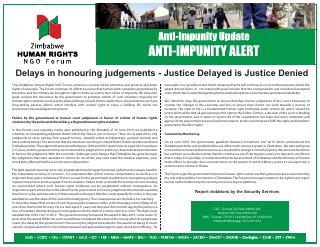