Previous 1 / 23 Next
Normal view
Zimbabwe Between a rock and a hard place – women human rights defenders at risk Introduction The human rights situation in Zimbabwe has been deteriorating rapidly since 2000. Human rights violations are taking place in a context characterised by a fast-shrinking economy that is being accelerated by government policies. Those policies, particularly on land reform and forced evictions, have contributed significantly to reducing the entire population’s capacity to obtain access to their rights to food,(1) health, education and housing. Zimbabwean women, who are active in dedicated women’s rights organizations and in other human rights organizations, are mobilising to confront the government in response to the violation of economic and social rights. They are demanding respect for and protection of their own human rights and the rights of members of their communities. After the government of Zimbabwe‘s programme of mass forced evictions in 2005 an estimated 700,000 people lost their homes or livelihoods or both.(2) The forced evictions drove people not only from their homes, but also from their market stalls, depriving informal traders of their means of earning a living. Women were disproportionately affected by this policy since they constitute the majority of informal market traders and are often the primary providers, not only for their own children but also for other children orphaned by the AIDS pandemic.(3) Many women, from both urban and rural areas, are finding it increasingly difficult to buy food, pay for medical care and earn a living. As economic and social conditions have worsened, the government of Zimbabwe has become increasingly intolerant of critics of its policies. Since 2000, the government has condoned the widespread use by the Zimbabwe Republic Police of excessive force, torture, arbitrary arrest and detention of government critics. These include trade unionists, human rights defenders, media workers, NGO workers, lawyers, students and other perceived opponents of the government.(4) Since 2005, hundreds of human rights defenders, the majority of them women, have been arbitrarily arrested and detained for engaging or attempting to engage in peaceful protest marches or meetings. Most women interviewed by Amnesty International have reported being subjected to beatings and ill-treatment while in police custody. The beatings, in some instances, amounted to torture. Women, standing up to defend their economic and social rights, face further human rights violations as women and as human rights defenders, including sexist verbal abuse and derogatory accusations. Women human rights defenders have been persistently denied their rights to freedom of expression, association and assembly. In addition, women human rights defenders in rural areas are being denied equal access to necessary cheap maize sold by the Grain Marketing Board (GMB). Since 2000, the government has used the law, in particular, the Public Order and Security Act (POSA), the Miscellaneous Offences Act (MOA) and later the Criminal Codification Act to undermine the ability of human rights defenders to promote and protect human rights. The police have categorized as criminal all legitimate activities of human rights defenders, as recognized in the UN Declaration on Human Rights Defenders(5) and reaffirmed by the African Commission on Human and Peoples’ Rights in their Resolution on the Protection of Human Rights Defenders in Africa.(6) Women human rights defenders in detention have been humiliated and denied food, water, medical care and access to lawyers. Some have even been detained while pregnant or with their babies or infants. They are held in deplorable conditions which fall far below international human rights standards. The treatment of women human rights defenders in custody has had dire consequences on them and their families, particularly on children who are often left without care while their mothers or carers are detained for days. However, in the face of an increasing government clampdown, Zimbabwean women human rights defenders have demonstrated great resilience, bravery and determination to end human rights violations. They are aware of the obstacles and the dangers they face, yet they refuse to be intimidated. 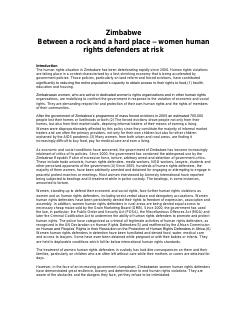