Previous 1 / 1 Next
Normal view
Bill Watch 43/2019 Media Commission Bill Gazetted; Budget Bills & and Amended MOPO Bill Passed by National Assembly 9 August 2019 BILL WATCH 43/2019 [9th August 2019] Zimbabwe Media Commission Bill Gazetted, Supplementary Appropriation (2019) Bill, Finance (No. 2) Bill and Amended Maintenance of Peace and Order Bill passed by National Assembly Both Houses of Parliament sat this week. The Senate sat on Tuesday 6th and Wednesday 7th August and then adjourned until Tuesday 27th August. The National Assembly sat on Tuesday, Wednesday and yesterday before also adjourning to Tuesday 27th August; its three days of sittings produced the results summarised in point form below. Finance (No. 2) Bill [link] & Appropriation Supplementary (2019) Bill [link] Both these Bills were passed by the National Assembly yesterday and transmitted to the Senate. They will not become law until they have been passed by the Senate, assented to by the President and gazetted as Acts of Parliament. As the Senate had on Wednesday adjourned until Tuesday 27th August the Bills will not be dealt with by the Senate until that date at the earliest. Maintenance of Peace and Order Bill [link] This Bill was also passed by the National Assembly yesterday but with amendments proposed by the Minister of Justice, Legal and Parliamentary Affairs to accommodate the reservations expressed by the Parliamentary Legal Committee [PLC] in its adverse report. The adverse report had been withdrawn on 1st August after the PLC and the Minister had agreed on the amendments. The amended Bill received a non-adverse report from the PLC before the final vote in the National Assembly and its transmission to the Senate. The amendments made to the Bill will be available on the Veritas website shortly. The amended Bill will not become law until it has been passed by the Senate, assented to by the President and gazetted as an Act of Parliament. That cannot happen until the Senate resumes sitting towards the end of the month. Zimbabwe Media Commission Bill Gazetted .This Bill was gazetted today. It is available on the Veritas website [link]. Veritas makes every effort to ensure reliable information, but cannot take legal responsibility for information supplied. If you want to contact Veritas, have any questions or wish to subscribe or unsubscribe please email veritas@mango.zw If you are looking for legislation please look for it on www.veritaszim.net Follow us on (+263 71 893 3633) This work is licensed under a Creative Commons Attribution-NonCommercial-ShareAlike 4.0 International License. 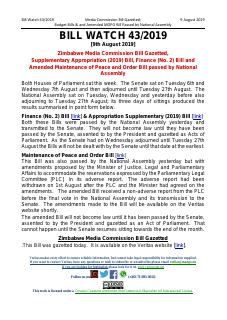