Previous 1 / 6 Next
Normal view
WELCOME We are excited to be re-launching our monthly human rights newsletter for all people who care about the human rights developments in the country. We hope through this newsletter, we will keep you informed about how we are working for the realisation and enjoyment of the rights of the Zimbabwean people. In this edition, the month of June 2019. FORUM RAISES A CONCERN ABOUT THE HUMAN RIGHTS SITUATION The Forum is gravely concerned about the deteriorating human rights situation in the country. Speaking at the quarterly human rights situation reflective meeting, the Executive Director of the Forum Ms Gorejena told the members that the tensions in the country were rising causing serious concern on the possibility of another shutdown which would expose many people to possible attacks by the State. The Forum noted that the attack by the State on civil society leaders could be a strategy to undermine them ahead of a significant crackdown on fundamental rights. In the statement released on 29 May 2019, the Forum condemned state attacks on civil society. The statement is available here. ANTI-IMPUNITY CAMPAIGN INTENSIFIES AS 68 VICTIMS DRAG THE STATE TO COURT The Forum intensified its anti-impunity work in June. The Forum issued a total of 68 summonses on behalf of 68 victims of human rights violations. The cases being pursued include cases where the police and army officials indiscriminately assaulted people in their homes, fired live ammunition causing injury and wanton assaults in various in various parts of the country. In a case which has taken 9 years, the government finally paid $21 367 to Mr Trevor Simbanegavi in damages injuries he sustained after being tortured by the police. This, however, is a drop in the ocean compared to outstanding payments. The Forum on 30 June 2019 has published 28 cases in which the government is refusing to pay damages according to various court orders obtained by the Public Interest Unit. Read the latest anti-impunity update here for a list of cases. FORUM WINS ORDER AGAINST MILITIA LEADER The Forum recently secured a judgment for its client who had been stabbed by a leader of a youth militia group leader in Nyanga. Donimore Magoshe was awarded damages in the sum of USD5,000 by Harare High Court Judge Mary Zimba-Dube. The costs were in respect of shock, pain and suffering, as well as medical fees after Mr Magoshe was stabbed by Gabrus Sanyamaropa, the leader of a youth militia group, said to be known in Nyanga as the ZANLA forces. Sanyamaropa had alleged that Magoshe was a member of an opposition political party and had stabbed him on the back. The Forum is proceeding with its efforts to execute against the property of Sanyamaropa. 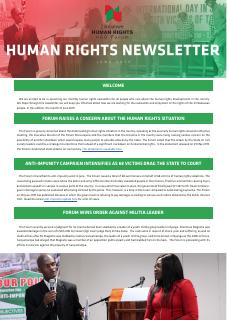 The newsletter talks about the human rights developments in the country and keeps people informed on how "The Forum" worked for the realization and enjoyment of the rights of Zimbabwean people in the month of June.