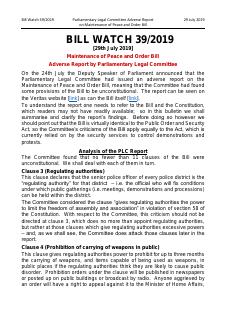 On the 24th July the Deputy Speaker of Parliament announced that the Parliamentary Legal Committee had issued an adverse report on the Maintenance of Peace and Order Bill, meaning that the Committee had found some provisions of the Bill to be unconstitutional. The report can be seen on the Veritas website [link] as can the Bill itself [link].