Previous 1 / 5 Next
Normal view
Bill Watch 40/2019 [The Freedom of Information Bill] 30 July 2019 BILL WATCH 40/2019 [30th July 2019] The Freedom of Information Bill On Friday 5th July the Freedom of Information Bill was published in the Gazette; it is available on the Veritas website [Link]. It is the first of three Bills the Government intends to present in Parliament to replace the much-criticised Access to Information and Protection of Privacy Act [AIPPA]. In fact the Bill has little to do with freedom of expression and deals almost entirely with access to information, which is guaranteed by section 62 of the Constitution; clause 3 of the Bill even states that its objective is “to give effect to the right of access to information in accordance with the Constitution”. It would be more appropriately called the “Access to Information Bill”. What the Constitution has to say on Access to Information Under section 62 of the Constitution: Zimbabwean citizens and permanent residents have a right of access to information held by State institutions, in the interests of public accountability (section 62(1)) Everyone has a right of access to information held by anyone else, if the information is needed for the exercise or protection of a right (section 62(2)) These rights of access may be restricted in the interests of defence, public security or professional confidentiality so long as the restriction is fair, reasonable, necessary and justifiable in a free and open democratic society (section 62(4)). Contents of Bill Scope of Bill The Bill is concerned with access to information held by three types of official entity, namely “public entities”, “public commercial entities” and “holders of statutory offices”. Broadly these comprise government Ministries and Departments, parastatals, State-owned companies, local authorities, and officials such as the Registrar-General [For convenience, in this Bill Watch we shall refer to these entities collectively as “public bodies”]. The Bill does not concern itself with access to information held by nongovernmental bodies such as companies and medical aid societies ‒ which may hold a great deal of information about members of the public. Requests for information A large part of the Bill ‒ Part III, consisting of 12 clauses ‒ is devoted to requests for information held by public bodies and what those bodies must do when they receive them. Requests will have to be in writing and public bodies will be obliged to respond to them ‒ i.e. to provide or refuse to provide the requested information ‒ “as soon as is reasonably possible” and in any event within 21 days, though requests concerning a person’s life or liberty will have to 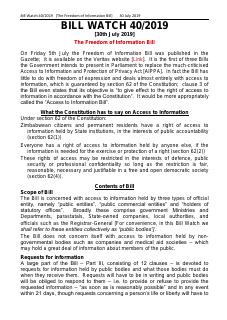 On Friday 5th July the Freedom of Information Bill was published in the Gazette; it is available on the Veritas website