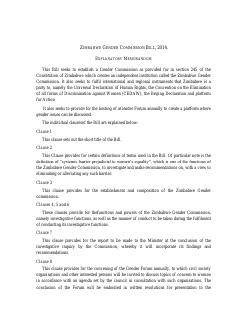 This Bill seeks to establish a Gender Commission as provided for in section 245 of the Constitution of Zimbabwe which creates an independent institution called the Zimbabwe Gender Commission. It also seeks to fulfil international and regional instruments that Zimbabwe is a party to, namely the Universal Declaration of Human Rights, the Convention on the Elimination of all forms of Discrimination against Women (CEDAW), the Beijing Declaration and platform for Action