ZHRC Report on the aftermath of disturbances after stayaway june 2019 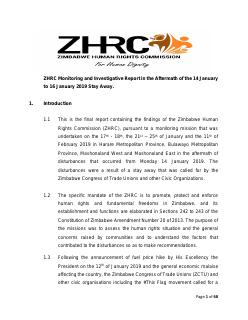 This is the final report containing the findings of the Zimbabwe Human Rights Commission (ZHRC), pursuant to a monitoring mission that was undertaken on the 17th - 18th, the 21st – 25th of January and the 11th of February 2019 in Harare Metropolitan Province, Bulawayo Metropolitan Province, Mashonaland West and Mashonaland East in the aftermath of disturbances that occurred from Monday 14 January 2019.